There’s a great SNL skit from a few years ago where Tina Fey plays a rather trashy woman speaking into the camera to someone she knows: “I saw you on House Hunters. You picked the wrong house, bitch!” Without the vitriol, I find myself thinking that sometimes while reading a novel about the author’s choice of point of view. 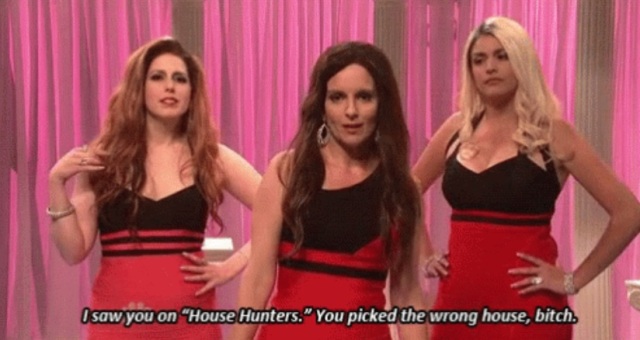 I’ve been reflecting on this as I begin working on the second draft of my urban sci-fi/fantasy novel. There are multiple tough POV decisions to make, but three come to mind:

I love the raw connection with a protagonist in first-person fiction, and it’s an obvious approach in any memoir (my previous genre). But while providing immediacy and intimacy, it can also be limiting for plot advancement.

As much as I admire The Hunger Games trilogy, Suzanne Collins wrote herself into a box by choosing to tell the story from the eyes of Katniss Everdeen. She largely pulled it off in the first book. However, over a three-book arc, the key drivers of the plot were President Snow and rebel President Coin. Because we could only hear from them when Katniss was in their presence or watching them on TV, too many opportunities to show plot advancement rather than tell them were lost. It’s telling that in the movies made from the books, the directors and producers liberated themselves from that restriction.

For my fiction WIP, I can’t possibly follow one character in first person, because there are multiple story lines involving numerous characters. In addition, like The Hunger Games, it’s positioned to be the first novel of a trilogy. But to what depth should one go with a third-person narrator?

When I began my novel, I found myself writing with a third-person limited perspective. I put the reader deep into the character’s mind, and chose not to reveal plot details outside of the character’s perspective (avoiding narrator omniscience).

In this choice I followed the (unconventional) approach of my published travel memoir. Any memoir is, of course, written after the fact, so the narrator truly knows all. I chose to write in the present tense, meaning my narrator (me) had no more idea than the reader what would happen. Many fellow classmates in MFA workshops advised against this approach, but I liked the immediacy of it, putting the reader in the passenger seat of my car as I drove across the United States. My mentor in writing the memoir, Sue William Silverman (who favors present tense in her own acclaimed memoirs) told me I pulled it off, but I know some readers found it off-putting.

I soon began to encounter challenges to this limited approach in my novel WIP, namely revealing details of plot and setting to the reader. Unlike my travel memoir, set in a familiar world, my WIP is set largely in present day Earth, but there is another world with a hidden connection to our own. Some humans travel there, and an unusual species from that world occasionally travels here, incognito. There proved to be too much complexity to share with the reader when bound by a limited third-person voice, so I’ve switched to an omniscient narrator.

One benefit when I did that? The book became far more “readable,” in my opinion. The narrator’s voice (essentially a unique character) allows me to add some levity to what could easily become a somber work, not unlike what you see Neil Gaiman do in so many of his novels. (Gaiman reminds me of 19th Century authors in the strength and conversationalism of his narrative voice; he even uses second person at times, which I’m not quite brave enough to attempt.)

Choosing to adopt a third-person omniscient voice and multiple POVs, however, introduced another decision. Should I enter multiple characters’ minds in one scene?

We’ve all experienced it, the dizziness and confusion that comes when an author engages in “head-hopping.” Because of my multiple, parallel story lines, I must enter multiple characters’ heads. But should I do it with more than one character in the same scene?

I’ve chosen to say yes, but cautiously. Namely, when entering a character’s mind, I linger there for a bit before jumping into another mind. I’m also keeping a slight detachment (maintaining the narrator voice), rather than going fully into the character’s thoughts and eyes. That helps smooth transitions.

Let me cite two authors who have navigated this well. In Strange the Dreamer, Laini Taylor maintains two storylines, one following an orphan named Lazlo Strange, and the other a half-god named Sarai. We are in third person through those characters’ eyes as they live their separate lives, but (of course) their stories eventually interconnect. Taylor artfully gives us both character POVs in those scenes, but goes for long stretches with one before shifting to another.

In The Five, Pulitzer Prize winner Robert McCammon is a bit more ambitious. I lost count of how many characters’ heads we entered in his novel, but there were many. We also entered as many as three (possibly more) in one scene. That said, we also spent significant time in each mind before shifting to another. (Of course, he could get away with that because his scenes were amazingly long, far longer than many authors could get away with from today’s publishers).

I’ve realized that because I have so many plot strands running simultaneously, I cannot get away with what Taylor did in Strange the Dreamer and limit my POV to two characters. I’ve also realized that scenes sometimes seem stilted when two characters we’ve been inside the minds of share a lengthy scene and we only enter one mind. So I’m embracing multiple POVs in single scenes, but I know it will be one of my biggest challenges in my first rewrite.

I can’t help but wonder how other authors choose to make these tough decisions, and if (like me with this WIP) the choice changes during the writing process. I welcome your thoughts!

4 thoughts on “Point of View: Did You Choose the Right One?”