Perhaps it’s because I don’t like being told what to do. Maybe it’s because I don’t like to reflect on some of the things I’ve done. But as a reader I generally do not care for the use of the second person. I’ve been forced to rethink my position after reading Sue William Silverman’s masterful essay collection The Pat Boone Fan Club: My Life as a White Anglo-Saxon Jew. The book is hot off the presses; you can read my review on Goodreads. 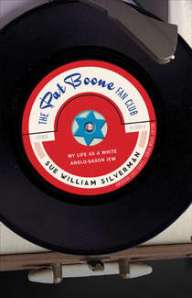 I’ve always considered Silverman (let me call her Sue, because she is a mentor and friend from the Vermont College of Fine Arts) the maestro of the present tense. A VCFA workshop instructor once faulted my memoir submission for being in the present tense, arguing that a reader knows the present tense is only true when the writer writes “I am sitting here writing. Now I am writing some more.”

But Sue’s two memoirs–Because I Remember Terror, Father, I Remember You and Love Sick: One Woman’s Journey Through Sexual Addiction–provide the reader with the author’s voice of experience by her skillful use of slanting details, selecting parts of the story that tell the reader more than the character herself knows at that moment.

So you can understand if I was a bit taken aback when I came across the first use of a second-person “You” in The Pat Boone Fan Club. “What are you doing, Sue?” I shouted in my head. “I want to like this book!” By that point I had already read four masterful essays and two “gentle reader” passages (one of them was a “gent[i]le reader,” get it?), so because she had me I kept reading.

The Jews are coming to visit, is how you think of it, back then. As if you, yourself, are not a Jew.

Who are these Jews?

Exactly, I said. Who are these Jews I do not remember visiting back then, and am I confused in thinking that I am not in fact a Jew? Perhaps as a journalist and policy writer I’ve dealt in too much non-creative nonfiction, but the fact-checker inside my head was already shutting down.

Keep reading and be quiet, I told it.

And so I kept reading. I completed that essay, “Swimming Like a Gelfite Fish.” I was then given four essays in the first person (welcome back!) before “you” returned, like a sneak attack, in an essay I had to read based on the title alone, “Prepositioning John Travolta.”

Perhaps it’s because you recently moved to Texas and can’t figure out if you live in Galveston or on Galveston Island that you begin to confuse prepositions.

This proved to be a delightful essay; humorous, insightful, thought-provoking. I then had my “you” palate cleansed with another “gentle reader” passage only to discover an even sneakier move by Sue. Her next essay, “Galveston Island Breakdown,” is in the second person but for the most part eschews the cue I use to spot it, the personal pronoun “you.” (Perhaps her confusion over prepositions, I thought, had spread to pronouns.)

Fall in love with a man who drives a blue Chevy convertible.

I’m sorry, have I just read an opening sentence that is an imperative? Am I to put down this delightful book and seek out this man (does Chevy even make a convertible now? Oh yes, I believe both the Corvette and Camaro come in those) and give him my heart? The essay continues along those lines, only using “you” when absolutely necessary to avoid confusion.

“Galveston Island Breakdown” begins on page 93. You may have noticed that I was still reading the book. My old policy of pretty much putting anything down that is in the second person had been demolished. I was thoroughly enjoying these essays. So, I asked myself, what did Sue do to draw me in and get me to overcome my aversion to the second person?

Reading Sue’s book has me tempted to experiment a little with this form. I know I will be my own toughest critic. How do you react to the second person, as a writer or as a reader?

25 thoughts on “Are You Talking to Me? Use of the Second Person”