Awhile back I had an epiphany; as I studied literary journals I would run reviews on this site. I then had a further epiphany; I would invite readers to submit their own. I’m pleased to feature the first guest post in the Lit Journal Nugget series, a review of Ep;phany by Jennifer (Jenna) McGuiggan, a great writer and budding roller-derby queen I met through her own blog The Word Cellar, only to learn she is an alum of my MFA program. Is there a journal or magazine publishing creative writing that you’d like to review for The Artist’s Road? Email me and we’ll talk!

I first heard about Ep;phany, a literary journal when I met the editor at a Vermont College of Fine Arts dinner during AWP 2011 in Washington, DC. I had just started my last semester of grad school, and the editor, Willard Cook, is a graduate of the program. His journal stayed on my subconscious radar while I finished up school and started thinking about sending my work out into the world, but I didn’t get a copy of Ep;phany until I ran into Willard again this past February at AWP in Chicago and then picked up a copy at the book fair. (I love that playful use of the semicolon in the journal’s title.) 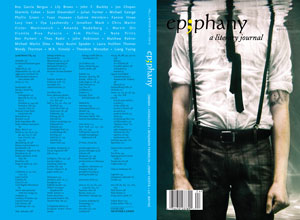 Epiphanies get a bad rap in the world of literature. Writers bemoan how overused and trite this literary device has become. Need a tidy way to tie-up the loose ends of your short story? Give your protagonist an epiphany! Need to impart some existential meaning to bridge the personal-universal gap in your memoir? Epiphany! To be honest, I’m not sure what poets think about epiphanies, but I feel like poetry functions on a different plane, one where the whole poem itself is the epiphany. At least, the poetry I like most has this feeling.

In fact, the prose I like most has this same feeling. And if I’m being really honest, I’ll confess that I adore epiphanies, both on the page and off. What writer (or reader) doesn’t long for a “manifestation or perception of the essential nature or meaning of something; an intuitive grasp of reality through something (as an event) usually simple and striking”? (Thank you Merriam-Webster.)

Say what you will about epiphanies in writing – and yes, they can be trite and sophomoric in the hands of less-skilled writers – but these flashes of insight, these “moments of being,” as Virginia Woolf called them, well, they’re the whole reason I write (and read).

Still, a whole literary journal committed to such moments is an overwhelming and dicey prospect. Things could go badly. But they don’t. As I read through this issue of Epiphany, the word that kept coming to my mind was swept, as in: swept-away to foreign lands, swept-along in (everyday) adventure, swept-up in an author’s peculiar, particular mindset. Although explicit “ah-ha moments” do show up in Epiphany (I even encountered the word “epiphany” in several pieces – how brazen! how meta!), many of the prose pieces are more like long, slow burns in which the sum of their parts function on that poetic plane, leaning toward meaning without any overt shriek of “Eureka!”

This aesthetic makes the pieces in Epiphany simultaneously more pedestrian and more profound than one might hope for or expect. Many of the pieces are set in countries outside of the U.S., but even the “domestic” pieces feel new and alien to a U.S. reader, an effect which the contributors achieve by pulling readers into their world and their minds quickly and viscerally, with little to no set-up or exposition. There’s a wildness to the pieces, even the tamer ones.

The sidebar of one of the journal’s web pages lists the names of several contributors and invites you to read their work so that “you may see life a little differently.” That’s Epiphany: as low-key and as intense as life itself.

Epiphany Editions, the chapbook publishing offshoot of Epiphany, a Literary Journal, offers its books in two formats: as handmade, letterpress-cover chapbooks, and as Book Kits, which enable readers to print, cut, and bind their own copy of the book. The press holds two annual chapbook contests, one for poetry and one for fiction. (This essayist hopes they’ll consider adding a third genre.)

The journal also offers fee-based editing and consultations services for prose and poetry, including a full-length manuscript consultation option.

Jennifer (Jenna) McGuiggan is a writer, editor, and creativity coach who lives in Pennsylvania. She received her MFA in creative nonfiction from Vermont College of Fine Arts and is working on an essay collection that is chock-full of epiphanies. She developed and teaches Alchemy, a series of online writing classes and workshops. Visit her in The Word Cellar, where she writes about everything from navigating the writing life to venturing into the world of roller derby.