Have you ever typed “crustacean Christmas” into Google? It probably says something about the oddity of our family tradition that an Artist’s Road blog post about it is the first entry on that list. Today I’ll provide a sequel post, but first some quick background.

It started with a Christmas tree ornament my wife purchased many years ago when she lived in Baltimore–a wooden, red crab with a bow. It escalated when I took my wife and kids through one of those holiday light display park exhibits, and we saw a 10-foot-tall Christmas crab. The final kick likely was my wife’s family tradition–learned during her childhood growing up on a New Jersey beach–of cooking shellfish for Christmas Eve dinner.

In 2008 I bought a 4’x8′ sheet of plywood and a can of red spray paint, fired up the power saw, and this was the result: 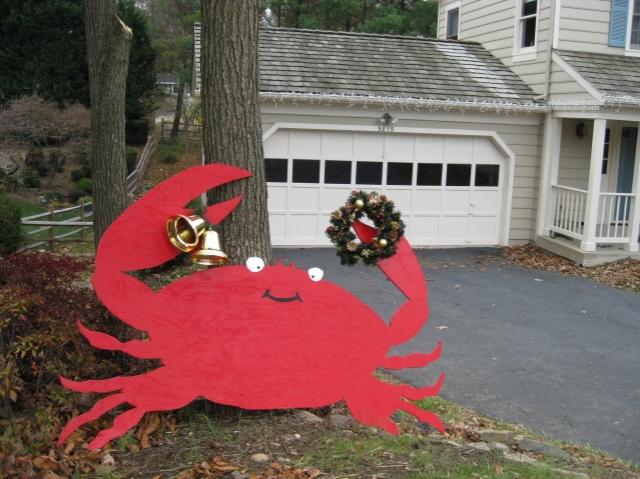 A tradition was born. In 2009 we decided to take it up a notch. Why settle for just one crustacean? Why not three? In the end, a biologist would say we ended up with two crustaceans and a mollusk, but nonetheless–after a lot of painting by the four of us in a cold garage–we debuted for our perplexed neighbors the Crustacean Choir:

Now we were on to something. Obviously 2010 would have to be even more ambitious. What if, I said, we didn’t need a spotlight to illuminate this year’s display? What if we used hundreds of Christmas lights, around and in the display? What would that be? Naturally, we came up with a Christmas tree. We’d use as ornaments our crab, lobster, shrimp, and clam. It was relatively simple to cut out, and while there was a lot of painting to do, I set up the saw horses in our living room this time, allowing us to paint in welcome warmth. Here it is in the daylight:

And here it is at night:

This fall I came up with an idea to top the last three years combined. For one, I decided to introduce two new characters. Second, it would be even bigger than before, using two 4’x8′ boards, with each character having his own board. It would actually tell a story. And the antagonist would be a character familiar to readers of The Artist’s Road (although phenomenally unfamiliar to my neighbors). Here’s the sketch I drew a couple of weeks ago:

This would require a lot of work. Sketching on the plywood, cutting it out, painting all of the sections of Mr. Bacon and Mr. Scallop. And all the while I wondered if people would get the premise–that the scallop was about to be bacon-wrapped–or if they would get that and then say “But what does that have to do with Christmas?”

Of course, any reader of this blog knows I don’t usually worry about what others think when I go off on a creative tangent. But the time our family has together during the holidays does stay front of mind. And this would require a lot of time. Time spent together as a family, yes. But time that could be spent in other ways.

Last week I pushed the bright orange cart into the lumber aisle at Home Depot. I picked out the right plywood (I learned that you need at least 5/8″ in thickness; the Christmas Crab was only 1/4″, and as the temperature rose and fall he warped, looking like he was trying to curl himself into a crepe). I’d ring this up, take it home on top of my unhappy car, then head to the craft store for new paint. I walked myself through this set of activities. Then I left the orange cart in the aisle and walked back to my car.

It’s important to spend time with loved ones. And family traditions matter. But at what point does a tradition become labor?

We scaled down our Thanksgiving feast this year, with me grilling dry-rubbed game hens instead of roasting a turkey. That freed up more time for us to be together as a family, and also provided a tastier bird than the vanilla ice cream of poultry. Perhaps I could extend that concept to Christmas. After all, our children are teenagers now. Soon enough they might have other plans during the holidays.

Tomorrow was the day I was going to cut out Mr. Bacon and Mr. Scallop. Sunday was the day allotted for family painting. Now I don’t have to figure out how to fit both planks of plywood in our living room for a toasty painting party. Instead, we are going Saturday to Mount Vernon, to spend a few hours seeing what George Washington’s Christmas would have been like if he had erected twelve Christmas trees (presumably none of them cherry trees). Tomorrow we’ll put up our own tree, and the only labor I’ll do beyond that is making some chocolate cocoa in a saucepan.

I’m sure my neighbors will be disappointed that we’ve chosen this year to go with a more tasteful Christmas display. But as we gather Sunday evening by our decorated tree–my son stoking a fire in the fireplace, my daughter trying to capture a sparking flame with her camera, my wife and I taking in the scene with marshmallow-and-cocoa mustaches–I don’t anticipate any regrets.