Thirty years ago, on July 16, 1981, I lost one of my muses to a violent car crash. I had never met Harry Chapin, had never been blessed to hear him perform live, but he shared the story of his life through his music, and the story of my life is forever changed because that shooting star passed through my firmament.

I might have been the only fourteen-year-old in 1981 calling himself the world’s biggest fan of a folk singer rarely heard on the radio. I often talked about Harry, using only his first name as we do when someone has touched our heart. Invariably I’d be met with a blank stare, and I’d say “You know, ‘Cats in the Cradle,’” and the other person would go “Oh yeah, ‘Cats in the cradle and the silver spoon,’ that song about the guy whose son won’t hang out with him when he’s grown up, sad song,” and then we’d stare at each other for awhile, and finally one of us would change the subject. But I didn’t need others to know how, or why, Harry’s stories spoke to me. 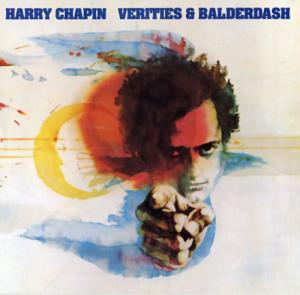 He was a humanitarian dedicated to tackling world hunger, and his friends and family continue the fight through the non-profit he co-founded, Why Hunger. And he was a storyteller, singing of lonely night-shift workers and Titanic dance band members. But he mostly sang about himself.

My favorite album was “Verities and Balderdash,” with the best songs on the album offering more of the former than the latter. “Cats in the Cradle” opened that album, but right after that came “I Wanna Learn a Love Song,” a poignant first-person account of a young guitar instructor winning the heart of a beautiful — and married — housewife. That was the story of how Harry met his own muse, his wife Sandy. Sandy was a muse for Harry, a poet who wrote the lyrics to “Cats in the Cradle.”

My favorite song on “Verities and Balderdash,” the song that cut to my heart, was “Shooting Star.” It’s the story of a “crazy” artist Harry refers to as the Sun, “burning bright and brittle.” He has a wife, the Moon, who shines back his light.

Harry was a shooting star, and Sandy his Moon. I, like Harry, was a bundle of creative fire. I was a Sun, I told myself, a tortured soul who “builds castles in the sky” and “dances to music no one else has ever heard.”

A short while ago I was listening to “Shooting Star” for most likely the two millionth time and the impending anniversary of Harry’s death hit me. Over those thirty years I had finished school, joined the workforce, married, had children. I was a grown-up, and grown-ups can’t burn bright and brittle. They have responsibilities.

The pain of losing Harry returned to me, and I had to stop listening to “Shooting Star.” A few minutes later a different Harry song was playing, “Story of a Life.” Harry wrote that song in the second person, so it wasn’t just the mood I was in that had him telling my own story. I had sought a wild life, he sang to me, but then I found a wife who shared the story of my life even when she saw my “dreams go poorly.”  My “wandering is done,” he said, and now I’ll find my “dreams of open spaces… in my children’s faces.”

I never did become that shooting star, a brittle, burning Sun. But I was touched by one.

Some scientists believe life on Earth began with a shooting star, the organic material that makes up every living thing seeding the planet by crashing here on a meteorite. Harry’s shooting star seeded something in me, a dream to live a creative life. This blog chronicles my attempts to recapture that dream, a dream to dance to my own music, a dream that has gone poorly at times.

I am once again pursuing that dream, and I can be a Sun. But I am not brittle. As such, I can be there for my wife and for my children. And they can be there for me, because my wandering is done. I will be a Sun for them, burning bright but not brittle, and I will dance in the light they reflect as my Moon.

8 thoughts on “A Shooting Star, or the Story of a Life”

I'm an on-and-off creative writer, currently on.
Join 11,191 other followers
Follow The Artist's Road on WordPress.com